Anita Anderson 8:55:00 AMBaseball, Brooklyn Cyclones, Coney Island, Ellis Island, Ferry, Luna Park, NY Mets, NY Yankees, Staten Island Yankees, Statue of Liberty 26 comments
As everyone knows, New York has two baseball teams, The New York Mets and The New York Yankees.  Most people today cannot afford to buy baseball tickets as they are expensive.  Both of us go to minor league games as the ticket do not cost a lot.  In my household all my husband, Rod, talks about is baseball.  The rivalry begins each baseball season as I like the Yankees and he is a die hard Mets fan.  We are at WAR during the season and playoffs of which team is better.  The "YANKEES" of course. As the Mets lose each year and haven't won a world series since 1986.  Rod jinxed the Yankees this year during the playoffs.  He will of course deny this. But I have the last laugh as I got our daughter, courtesy of her auntie Frances, a Yankee onesie. 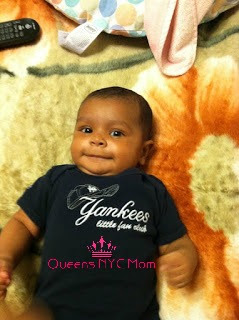 So Rod got our baby daughter her first Mets onesie and has turned my 5 yr old from a Yankee fan to a Mets fan. As I said again, the rivalry is intense at my home. My daughter is a Yankee fan, but her father says otherwise.  Aidan now tells his dad that he likes both teams. I haven't lost hope that he will turn and come back to the real team. 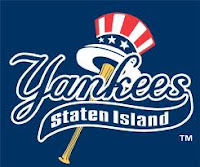 Besides the Major League Teams we also have two Minor League Teams in New York City.  Both teams are Triple A, The State Island Yankees and The Brooklyn Cyclones Mets.  Both teams play from June through September.  The tickets are inexpensive ranging from $6 to $16 dollars.  Note pricing change as the new season begins so check for new prices.  If you can't afford to go see the major league teams go see a minor league game.  You'll spend less and enjoy your day with the family.

The Brooklyn Cyclones play at Keyspan Park in Brooklyn by Coney Island. Before or after the game you can go stroll down the Coney Island Broadwalk.  Visit the new Luna Park @ the former Astroland amusement park. Luna Park has 19 rides and attractions.  Or you can go to the Coney Island Beach.  I have wonderful memories as a child at the beach, you should check it out.

The Staten Island Yankees play at Richmond County Bank Ballpark which is located in St. George, Staten Island just off the Staten Island Expressway (I-278). You can take a free ride on the Staten Island Ferry everyday.  Yes I did say FREE RIDE.  The ferry runs 24 hours a day.  Just take a jacket or sweater now as its windy.  The ride is romantic as the sun sets.  You see NYC sky light up, from the top of the ferry you can see the Statue of Liberty and Ellis Island.  I took the ride on the ferry at night it was BEAUTIFUL.

There are so many attractions to see.  Some are free and do not cost you a penny.  So if you come to NYC take the Staten Island ferry see lady liberty, Ellis Island, and the bridges lite up the night.
Share: